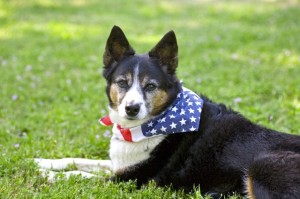 Who: The outdoor ceremony is free, open to the public and dogs are welcome.

What: The Corps of Cadets Alumni Band will play from 2:00 until 3:00pm. Pack your picnic and bring your patriotic pup to listen to some invigorating music. This informal concert will be held in the Shrine of Memory.

Why: Celebrate your freedom, show your patriotism and have a wonderful outing with your pet. This event will follow the annual Memorial Day Ceremony, which will feature Governor Bob McDonnell delivering the official commemoration by the people of Virginia in honor of the fallen heroes who paid the price for our freedom.

The Virginia War Memorial is considered by many across the nation as the most impressive and stirring of state memorials in the United States. Originally conceived as a memorial to Virginians who had lost their lives in World War II, the construction of the memorial was modified as the nation found itself embroiled in the Korean War. The memorial is now preparing for massive expansion to create an additional memorial for Virginias who have made the ultimate sacrifice during the war on terrorism.

Hope to see you there!  Don’t forget to bring water and a bowl for your four -legged buddy.  For more information, check out Music at the Memorial.